Clicking the above link will take you to a website that is not operated by Hotfrog. Hotfrog is not responsible for the content or availability of linked sites.

Franchising is one of the most common and successful business models in Canada. Currently, there are nearly 85,000 franchise businesses licensed to about 2,000 franchisors. In total, the industry sales are a total of approximately $100 billion, which is approximately 45 percent of the total retail spending in Canada. The prominence in Canadian society of the unique type of business relationship known as franchising is well supported by statistics. The economic impact of the franchise industry is evidenced by job creation and franchise fees in addition to consumer spending. Over 1.5 million Canadians are employed by franchise businesses. Franchisees invest varying amounts, depending on the terms and type of business. The low end is typically an investment of between $10,000 and $15,000, while high end franchises may require an investment of several million dollars. The Canadian franchising industry is one of the largest in the world, second only to that of the United States. One of the most beneficial and challenging aspects of franchising is the unique relationship between the franchisor and the franchisee. In many ways, the relationship between the franchisor and franchisee is very similar to that of common arm's length transactions of independent businesses. However, the franchise relationship is made unique by the underlying foundation of interdependence between parties.

Is The Franchising Forum in Canada your business?
Claim your listing and attract more leads by adding more content, photos and other business details. 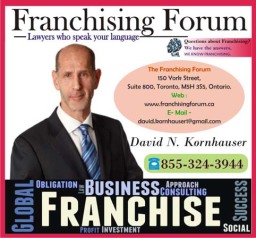